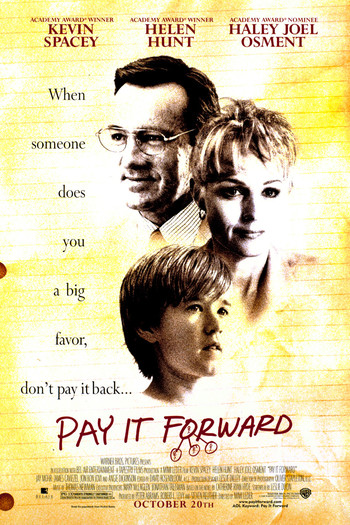 Pay It Forward is a 2000 drama film directed by Mimi Leder and based on the novel by Catherine Ryan Hyde, starring Haley Joel Osment, Helen Hunt, Kevin Spacey, and (in a minor role) Jon Bon Jovi.

A boy named Trevor is given an assignment to "think of something to change the world, and put it into action". He thinks of "paying it forward", in which you help three people, and tell each of them to "pay it forward", and help three other people. We see the implementation and results of this plan for kindness through the eyes of the people he pays it forward to.