Western Animation / The Pebble and the Penguin 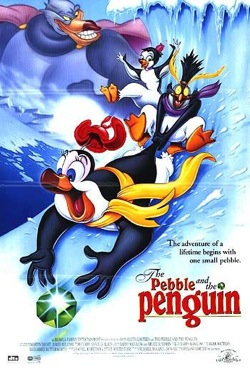 There's four penguins here, and one of them has teeth. And that's only the start...
Advertisement:

Don Bluth's 1995 epic story about a bunch of singing penguins.

Adélie penguins engage in elaborate courtship behavior where the male builds a nest of pebbles to attract mates. Tough for Hubie (Martin Short), as he has no pebble with which to win the affections of the lovely Marina (Annie Golden).

After Hubie finds an emerald which falls from the sky for... some reason... his rival Drake (Tim Curry), a penguin so pumped full of steroids that his veins should be exploding every time he flexes, steals it from him and attempts to feed him to a Leopard Seal. Hubie escapes and winds up on a ship with the cranky Rockhopper, Rocko (James Belushi). Together, the two penguins must travel 3,000 miles to return to their island home and settle things with Drake.

Perhaps The World Was Not Ready for a movie about penguin romance. You wonder how well this could have done in the wake of Happy Feet...

Tropes used in this movie: