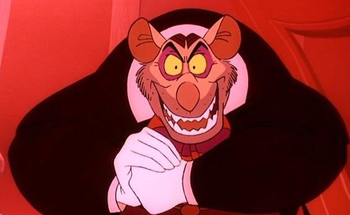 They don't just look that way because of the reddish lighting here...
"We were trapped. There he stood, between us and the alley. Scut Farkus staring out at us with his yellow eyes. He had yellow eyes! So help me, God, yellow eyes!"
— Adult Ralphie, A Christmas Story
Advertisement:

Historically, this is probably inspired by canines, felines, rodents, reptiles, toads, and birds of prey, which can have amber, yellow, gold, or orange irises, and are associated with being conniving, clever, and wise. Also reptiles and toads are sometimes associated with villainy, and can have yellow eyes. Ironically in these animals what you're usually seeing are larger irises which were probably mistaken for a yellow sclera. In particular, the visual itself might be related to the reflective eyes of many animals in the dark, which explains the particular bright palette in contrast with dark or dim figures.

In Real Life, yellow and brown in the sclerae or the cornea, not the iris, in human beings is unhealthy. It's usually a symptom of allergies or liver disease — yellow sclerae are a typical symptom of jaundice.

Compare Supernatural Gold Eyes, Black Eyes of Crazy and Red Eyes, Take Warning (both of which are commonly paired with this trope).