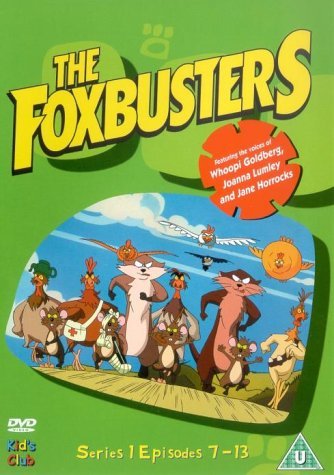 The Foxbusters is a British animation series, very loosely based on the Dick King-Smith book The Fox Busters. It was made by Cosgrove Hall and consists of two 13-episode series, each episode running 11 minutes, made between 1999 and 2000. The show was co-written by the animation partnership of David Max Freedman and Alan Gilbey, and occasionally with Joel Jessup as a third writer. It was directed by Jon Doyle.

The show is primarily set on Foxearth Farm, a fictional farm based in the English countryside, which is dominated by a variety of animals, particularly the chickens. The Foxbusters are three chickens, Ransome, Sims and Jeffries, who have the unlikely ability to fly. Each has a different personality; Ransome is the best flyer, Sims is the smartest and Jeffries is the comic relief. The Foxbusters also have the ability to spit grit like machine guns, and drop hard-boiled eggs as if they were bombs—and these are used to effect among other methods to keep the hungry pack of foxes in Foxearth Forest at bay.

The arguments and conversations among the chickens makes an effective comedy. The foxes' attempts to get the better of the chickens are often unsuccessful, but they add a lot of humour to the show. The show itself is laden with gags and action, and is of a quality which led to its receiving two major awards in 2000. One was a BAFTA for 'Best Animated Series' and the other was from the British Animation Awards for 'Best Children's Series'.

Despite being a critical success, the show did not enjoy the same level of commercial success as some of its competitors. While not seeing much commercial success upon release, in more recent years the show has picked up a cult following, particularly in furry fandom.