White and Red and Eerie All Over 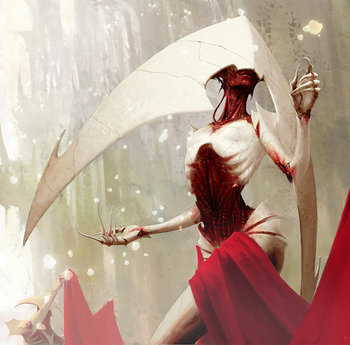 Black ain't the only color that goes well with red.
Advertisement:

Whereas red and black is commonly used as a shorthand for evil or '90s Anti-Hero edginess, white and red has a tendency to seem... rather off.

White is a sterile color generally agreed upon by many to be a "pure" one, and when introduced with a touch of vibrant red, it creates a very jarring contrast. But while this combination of colors can be elegant, in some circumstances, there can also be something unnervingly haunting about a white-and-red coloration. White is the color of bone and bloodless skin, and red the color of blood and bared flesh. Put them together and you get an unholy matrimony between Light Is Not Good and Red Is Violent; an appearance that is sickly, sterile, and ethereal, yet vibrant and visceral at the same time, like a pale corpse cut open to reveal its insides.

The sight of a "pure" color such as white being tainted with bloody red may be a key component in the eerie horror behind pale vampires who don't bother to wipe their mouths, white suits and wedding dresses stained with blood, blood in the white snow, sinister white-haired folks with red eyes (see Albinos Are Freaks), the makeup of many a Monster Clown, the striped tent of a Circus of Fear, the sterile walls of a hospital or laboratory where the zombies or test subjects leave a path of mangled corpses in their wake, that red spot on the sheet you just woke up on, etc. In addition, white is associated with death in China and other Asian countries, so a Stringy-Haired Ghost Girl clad in blood-soaked robes can add to their inherent scariness.

See also Light Is Not Good and Red Is Violent. Contrast Light Is Good, Red Is Heroic, and Red-and-White Comedy Poster, the latter which is meant to be funny, not scary. Also contrast Green Means Natural for a color association used to indicate something being natural. Might turn up in Medical Horror as well, and is one of the reasons behind the assumption that Albinos Are Freaks—though in most albinistic humans in Real Life, the famous red eyes only show up under direct bright light (with blue being the most common color the rest of the time).

Compare Red and Black and Evil All Over, for a common interpretation of another particular color combination, and Grayscale of Evil for villains who eschew color altogether. For a healthy dose of Irony, contrast Cheery Pink; white and red being one of, if not the harshest color combination you can have means it's quite funny that combining them gets you the color most associated with softness. See also Psycho Pink if the eeriness of white and red is mixed to make a subversion of the seemingly innocuous color.