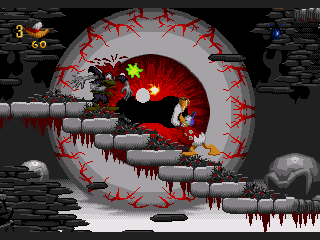 What the duck did Donald get himself into now?
Advertisement:

Donald in Maui Mallard, also known as Maui Mallard in Cold Shadow is one of the lesser known Donald Duck action games. It was originally released in 1995 for the Sega Genesis in Europe and Brazil and later ported to the SNES (with different level designs and mechanics), Game Boy, and PC (based on the Sega Genesis version and featured an orchestrated soundtrack).

It isn't known if Maui Mallard, the detective who is also a ninja, is an Alternate Universe version of Donald, his past self or somebody completely unrelated - but surely he'd like to quit his dangerous supernatural job and live a simpler life. However, he's called for one last mission: to search and find the missing idol statue of Shabuhm Shabuhm before the island it protects explodes. That won't be easy since everyone in the island wants him dead for whatever reason...

Gameplay is divided between Maui's two forms. Normally he's equipped with a "1935 Westchester Bug Gun", a gun that shoots bugs. Besides the normal shot, there are three other types that can be mixed into more powerful attacks. And when Maui finds obstacles he can't get through, he can turn into Cold Shadow, a ninja who uses a staff to attack enemies with combos, swing over pits and move at high speeds over lava surfaces.

Although a sequel and a cartoon were planned, the game didn't do well at market. They even removed Donald's name from the game in the US, due to the marketing team's concern that children wouldn't willingly buy a game featuring a character that wasn't "hip" in their eyes.

Still, it has some very dedicated fans. Back in 2011, BigMex at 1UP wrote

on the story and legacy of Maui Mallard that is a must-read for fans of the game. And to celebrate the game's 25th anniversary, Max Nasikan published an interview

with 12 of the game's developers, revealing several details about its development and the unreleased sequel.