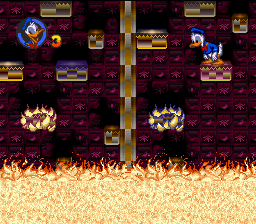 Some ducks just want to watch the world burn.

Donald Duck No Mahou No Boushi (Donald Duck and the Magical Hat) is a Platform Game released for the Super Famicom in 1995 by Epoch, exclusively on Japan. It begins as a rather mundane adventure, with Donald doing odd jobs so he can later buy a hat as a gift for Daisy. When he finds the hat already sold out, things take a turn for the fantastic as he ends up helping a king who has been turned into a hat to take back his kingdom from the villainous Pete.

Tropes striken down by diving headbutts include: