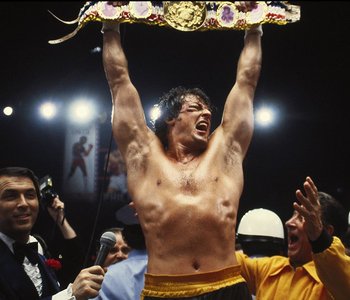 Yo, Adrian! I did it!
For real, though, we need to talk victory poses. Something coordinated for the live, on-camera finish! Could blow up big—start a new trend!
— Barret, Final Fantasy VII Remake
Advertisement:

It is human nature to celebrate when a victory is achieved.

At the end of a battle, the victorious character or characters will almost always perform an action to celebrate their success. It may be small (thrusting one arm up) or elaborate (jumping for joy and shouting) depending on the character or the circumstance. You may even see a full-on Happy Dance. Stab the Sky, V-Sign, and Bicep-Polishing Gesture is often a victory pose. For more savage characters the pose can include a Victorious Roar and/or Primal Chest-Pound.

A common form of the Role-Playing Game version is when, after the battle is done, the camera rotates around to the heroes, who put their weapons away with a flourish and/or a pithy Victory Quote. For extra badass, it may be done Atop a Mountain of Corpses. Sword-wielding heroes may also Swipe The Blade Off or Stab the Sky.

If the victorious character tries to humiliate the loser as well as celebrate their victory, this trope crosses into Unsportsmanlike Gloating.

Turn your exercise into EXP!

At the end of every level, the Trainee does a victory pose, building squat power then stretching for the sky.

Turn your exercise into EXP!

At the end of every level, the Trainee does a victory pose, building squat power then stretching for the sky.