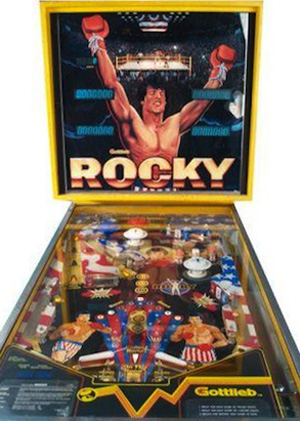 Liquor bottles not included.
"Enter the ring with the champ!"
Advertisement:

Rocky is a Physical Pinball Table designed by John Trudeau with art by David Moore. It was an indirect tie-in to Rocky III, and was released by Gottlieb in 1982.

Not surprisingly, the Rocky pinball pits the player in a ten-round boxing match; knock down the drop target corresponding to the current round to advance to the next. More surprisingly is the unconventional table layout, which has two pairs of flippers at the bottom of the playfield. Extra balls and specials are available for going through seven or more rounds, and an "Instant Win" button gives beginners a fighting chance. Cheering crowds and the "Rocky" theme music round out the package.

Sharp-eyed filmgoers will notice that the Rocky pinball machine is not the one that appears in Rocky III; that was a prop backglass installed on an existing pinball table. Only three of the prop backglasses were made. One was destroyed on-camera, and the surviving two are in possession of private collectors.