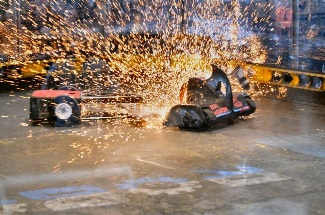 Two robots settling their differences over a nice cup of tea.
Advertisement:

In 1993, a Lucasfilm toy designer named Marc Thorpe was disassembling a remote control vacuum cleaner he had pitched to his bosses. However, an idea soon came to him. What if he attached a chainsaw or a power drill to it? Marc had a vision of his creation cutting a hole through his wall. If other people built machines like his and fought each other, what could come of it? The following year, the first annual Robot Wars event took place, and as result, the sport of Robot Combat was born.

Robot Combat is a popular hobby/sport wherein competitors construct remote controlled machines (dubbed robots, although the majority are not autonomous) of varying designs to fight one another... to the DEATH! (Or a judge's decision, ring out, disqualification, and so on.)

Robot Combat first attained mainstream popularity in the late 90s and early 2000s, where BattleBots and Robot Wars enjoyed good ratings and were heavily advertised. From there, the number of competitions has skyrocketed to dozens per year across several countries and continents, most notably in Europe and North and South America. Robo Games still draws good crowds, and Battlebots still hosts non-televised tournaments from time to time, having spent more effort re-purposing their business as an educational robotics experience under the name Battlebots IQ. Builders come from all walks of life, from special effects technicians to programmers and engineering students from nearby schools, to your everyday hobbyist with access to a machine shop. As a result of the sustained interest in the sport, from 2015 on there was a revival of interest in televised competitions, with first BattleBots and then Robot Wars returning to the airwaves for (at present) four revival series of the former and three of the latter before it was cancelled again, as well as new series such as King of Bots coming out of China.

For a great source on learning the basics of robot construction, see here

. For a great source on buying robot parts, see here

Robot design is heavily varied in regards to mobility and weapons systems.

Shows based on the sport include:

Everyone was expecting a battle between two big bots to be awesome, but NOBODY was expecting one of them to be flipping in the air throughout the match!

Everyone was expecting a battle between two big bots to be awesome, but NOBODY was expecting one of them to be flipping in the air throughout the match!