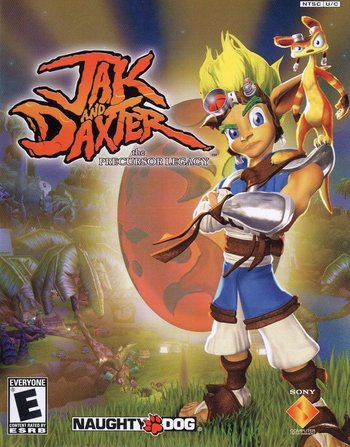 Ah yes, the good old days.
"So it seems the answer begins not with careful research or sensible thinking. Nay! As with many of fate's mysteries, it begins with but a small act of disobedience..."
— Samos the Green Sage

The debut game of the widely loved Jak and Daxter series, released for the PlayStation 2 in December of 2001.

In this first game, the Heroic Mime Jak and his buddy Daxter travel to the mysterious Misty Island, against the advice of the wise Green Eco Sage Samos. Not long after arriving, Daxter winds up getting knocked into a well of Dark Eco — but instead of being instantly vaporized, he is transformed into a creature called an ottsel, much to his chagrin. Thus the two set off to find a way to reverse the transformation. Unbeknownst to them, their quest will lead them to much bigger problems.

This game could be seen as the PS2's answer to Super Mario 64 (as well as taking a few cues from The Legend of Zelda) — what with the strong emphasis on Collect-a-Thon, run and jump platforming, bright and lively art, endearing characters, and fun levels and puzzles. Then everything changed in the sequel...

The Precursor Legacy has received two re-releases, one being a port to the PlayStation 3 and Vita as a part of The Jak and Daxter Collection, and the other being a "PS2 Classics" emulation for the PlayStation 4.