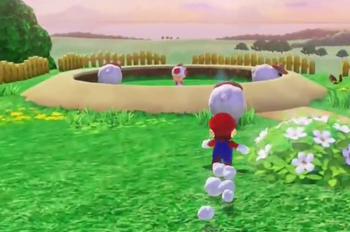 "My name is Little Bo Peep, and I have lost my cowleks! With all these battles going on all of the time, they keep running away. Can you help me get them back into my pen?"
— Bo Peep, Spyro 2: Ripto's Rage!
Advertisement:

Herding Missions are a type of Fetch Quest in video games where the objective is to locate a group of animals and corral them into a pen or other contained area, either all in one group or one-by-one. The quest is always given by the caretaker of the animals, generally a farmer or shepherd figure.

The quests usually take place in a fairly large, open area — such as a Hub World or a stage with multiple connected sub-areas — to give the animals lots of places to hide. Occasionally, once you find all the animals you were originally charged with locating, you will immediately be asked to find a few more. In some missions, you don't have any way to directly control them, so you have to goad them in the desired direction repeatedly. In others, you can pick them up and carry them, but this encumbers you — and when obstacles force you to set the animals down temporarily, they'll attempt to run away from you.

In contrast to Escort Missions, where your charge must be protected from injury or damage at all costs, the animals in Herding Missions are usually immune to damage, and often require the player to attack them in order to launch them into the pen, which is where a lot of the challenge can come from: not only finding them but being careful not to overshoot and fling them over a cliff.

Most often found in Platformers and RPGs (the two genres that most prominently feature sidequests), but can be found in other genres as well.