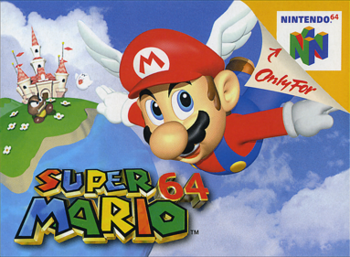 It's-a me, Mario!
Dear Mario:
Please come to the
castle. I've baked
a cake for you.
Yours truly—
Princess Toadstool
Peach
Advertisement:

Princess Toadstool, er, Peach has invited Mario to come to the castle, having told him that there would be cake. However, when Mario gets to the castle, he is instead greeted by Bowser, who has once again kidnapped Peach. He has also stolen the castle's 120 Power Stars and hid them inside paintings around the castle that are portals to other worlds! This looks like a job for Super Mario!

Though not the first 3-D platformer, Super Mario 64, released in June 1996 for the Nintendo 64 (September 1996 in North America and March 1997 in the PAL region), is heralded as one giant leap from 2-D gaming to 3-D gaming, and its influence on the platforming genre — from the greatly fleshed out Hub World to its nonlinear gameplay — has been felt ever since (leading to the creation of the Collect-A-Thon Platformer sub-genre). Notably for the Super Mario Bros. series, this game places a heavier emphasis on exploration and puzzle-solving than most games in the series.

Super Mario 64 is notable for being the last finished game directed by series creator Shigeru Miyamoto. Miyamoto was also tapped to direct a sequel to the game, but an incredibly long period of Development Hell burned him out from the position, and after the title was cancelled, he quietly stepped down from the director's chair for good. Today, he mainly serves as a producer and advisor at most, not just for Mario, but for Nintendo as a whole, generally leaving the directorial reins to various other members of Nintendo's staff. Miyamoto's involvement with Mario in particular would decline over time, passing the torch to fellow developers Yoshiaki Koizumi and Koichi Hayashida. By Super Mario Odyssey, he would primarily act as more of a figurehead for the franchise than an actual creative guide.

Super Mario 64 was later brought back to usher in Nintendo's first portable 3D system as Super Mario 64 DS in November 2004 (December 2004 in Japan; February/March 2005 in the PAL region). This version brings the total star count up to 150 from the original game's 120, shifts some of the original stars around (while removing othersnote Specifically replacing those stars which were simply placed at a point in the level with no further context.), adds a few new levels and bosses, includes multiplayer, and has three additional playable characters (Yoshi, Luigi, and Wario). In September 2020 the original Nintendo 64 version would get an Updated Re-release on Nintendo Switch as a part of Super Mario 3D All-Stars as part of the 35th anniversary of Super Mario Bros.