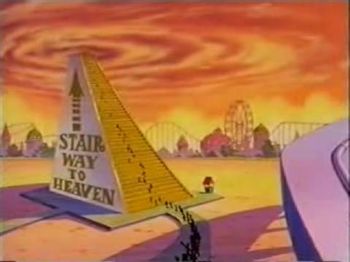 Not much of a ride, is it?
And he dreamed that there was a ladder set up on the earth, the top of it reaching to heaven; and the angels of God were ascending and descending on it.
—Book of Genesis 28:12
Advertisement:

For example, in Genesis 28:12, Jacob dreams of a stairway (or ladder, translators disagree) connecting Earth to Heaven with angels going up and down it. The Ancient Egyptians actually tried to build one (known today as the Step Pyramid of Djoser).

A more "modern" take is to replace the stairway with an escalator, though even that iteration of the trope dates back at least to the 1941 movie Here Comes Mister Jordan.

The symbolic version of this trope is Ending by Ascending, when a character goes up a staircase (or ladder or what-have-you) to represent coming to the end of a journey.

Sometimes an Absurdly Long Stairway. Contrast Hellevator. If the character doesn't make it in, the stairs may turn into a Surprise Slide Staircase to Hell. Not to be confused with Space Elevator. See also Ride the Rainbow. For cases when a character wishes to reach the sky in a physical way (while still being alive), see Journey to the Sky.

Named after the Led Zeppelin song, from the band's untitled fourth album.

Bart on the escalator to heaven

After Bart Simpson gets hit by a car, he dies and starts to ride an escalator to get to heaven.

Bart on the escalator to heaven

After Bart Simpson gets hit by a car, he dies and starts to ride an escalator to get to heaven.