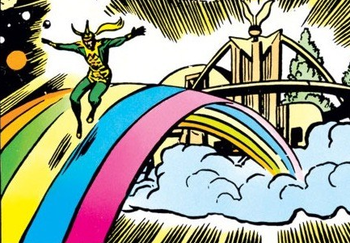 Fly Bifrost: The Colorful Way to Travel!
Thor: What you seek, it is a bridge.
Jane Foster: Like an Einstein-Rosen Bridge?
Thor: More like a Rainbow Bridge.
— Thor
Advertisement:

Many cultures have different connotations on what a rainbow is, having made their theories long before science revealed it to just be reflection, refraction and dispersion of light in water droplets. One common idea is that this arch of color is used as a vehicle for otherworldly beings.

This form of Not Quite Flight can be read in a number of ways. Maybe they are Sky Surfing, treating the front-end of a rainbow as a surf-board surfing across the ocean of clouds. Perhaps the rest of the rainbow is a vapor trail that refracts the many colors through the air. Maybe rainbows are giant snakes that eat elephants and people and the user is just their owner, the snake their mighty steed.

Sub-Trope of Everything's Better with Rainbows. Compare with Flying on a Cloud, Ride the Lightning and Stairway to Heaven. See also All Your Colors Combined, Rainbow Lite and Rainbow Motif.