Literature / The Adventures of Fox Tayle 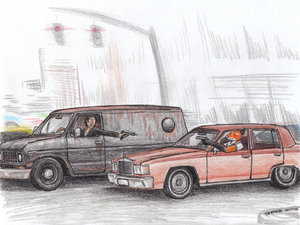 The Adventures of Fox Tayle is a 42-chapter story (plus an epilogue) that can be found on DeviantArt. It was written by wannabemustangjockey, also known as Jay. The basic premise of the story (which seems to be finished) is that Fox Tayle was just an ordinary fox. This company that was working for the U.S. government took him in under "Project Plume". Fox, along with a German Shepherd and a wolf, are put through tests and experiments designed to turn them into tough soldiers that can be used in combat. The rationale being that animals don't have families you have to write home to when they die. At the peak of the project's success, The Government ordered Project Plume cancelled, and guards came in guns blazing to the (relatively nice) cells where Fox, Shep, and Wolf were being kept. Shep and Wolf are killed instantly, but the sound of the shots that killed them warns Fox with enough time to escape.

He escapes in a truck stolen from the BioCon parking lot, with a guy holding a BFG firing after him. He escapes, and after driving for a short time, his truck breaks down. An animal activist named Wanda Meyers takes him in and shelters him in her trailer (in southern California) for a few months. The government later discovers where he is, though, and they send a missile for her trailer. Fox hears it coming, runs in the house, and runs out the other side with Wanda, but when the missile hits, he gets injured and a piece of Wanda's trailer hits her in the back of the head. After mourning the loss and burying her, Fox heads closer to the Los Angeles area. He takes a Chevy El Camino from a used car lot and drives it up to the Wal-Mart in San Bernadino. After taking a rifle, ammunition, and some food (he'd pay if he had time and if cops and store security weren't after him), he heads north for the San Francisco ASPCA. There, he meets Diana Foxworthy. He stays at the SF ASPCA for a few weeks, but the FBI somehow finds him again. In short, his next two stays include a really environmentally-minded couple, and an Extended stay at a Motel 6 in Oakland. It is there that he learns about a group known as furries which will be meeting at a certain hotel in San José in January 2006. Initially, he thinks he'll find refuge with "others like [him] out there," and finally escape the FBI chasing him.

Unfortunately, at the convention, he is caught and tranquilized by the FBI. He wakes up with a breathing tube inside a circular glass tank filled with water. It is there he meets the antagonist: Dr. Theodore Cardiff. One other important character that is introduced later is Carlos Padrino. Later on in the story, Fox also travels (with Diana and Carlos, but he leaves sooner than she does) to many other locations in North America during the course of the story, including Las Vegas, Nevada; Denver, Colorado; Bonnyville, Alberta, Canada; Dearborn, Michigan; Ohio, and Pennsylvania. Most of this time spent traveling is due to being pursued relentlessly by FBI agents or local police.Put another way, it's The Jason Bourne trilogy meets Shadow the Hedgehog plus a whole bunch of other stuff (like a tiny bit of G-Force, for example).

The entire story, plus other related things, can be found here

Now available on Amazon as an eBook: https://www.amazon.com/Adventures-Fox-Tayle-ebook/dp/B09F63S141

And as a paperback book: https://www.amazon.com/Adventures-Fox-Tayle/dp/B09F1G41P3/

The Amazon version is updated and expanded, with additional details in almost every scene, and an expanded opening that covers more backstory that was glossed over in the first publishing to Deviant Art.

For the record, Fox Tayle is a borderline Funny Animal / Beast Man.

Tropes used in The Adventures of Fox Tayle: