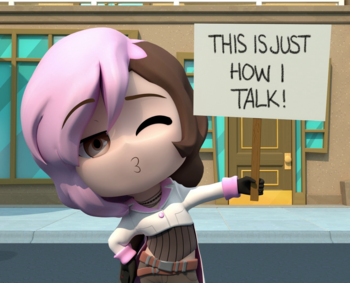 She's fluent in sign language.
"The profoundly deaf Grot gun-crews utilize crude sign-language to communicate. This tends not to work very well as Grots can only carry so many signs."
— 3rd Edition Ork Codex, Warhammer 40,000
Advertisement:

A mute character — or one who has been rendered speechless by events — will communicate with hand-held signs on which are scrawled his comments and questions. Flipping the sign will often display additional messages — often more than the two one would expect from a simple two-sided object.

These signs appear and disappear (like so many other possessions of cartoon characters) as needed.

Usually they are examples of No Fourth Wall, as they frequently bear comments made to the audience, not other characters. Compare Hand Signals for those who communicate with hand gestures. Reading Foreign Signs Out Loud may ensue in dubbing. This trope is very useful for a Silent Snarker.

The Fox, gagged by Baby Huey, pleads with the audience with a singular sign.

The Fox, gagged by Baby Huey, pleads with the audience with a singular sign.