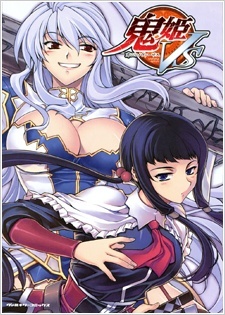 Onihime VS (also known as Phantom Princesses VS in S. Korea) is a manga written by Lim Dall-young and illustrated by Soo-Hyon Lee. It was serialized in Comic Valkyrie from 2008 to 2012.

Setsuna's only desire is for his sister to live a happy life. Weak, frail, and constantly bullied, Setsuna believes he's nothing but a burden to his sister and decides to take his own life. As he prepares to jump off a bridge, a mysterious man appears and presents him with an unusual offer. He offers to purchase Setsuna's life in one year after which Setsuna will die in a manner the man chooses. In exchange, he will give Setsuna's sister 10 million yen at the completion of the contract. Skeptical at first, Setsuna accepts. The next morning, thinking It Was All Just A Dream, Setsuna awakens to find two beautiful women sitting beside him. They are Kanna and Rena, Oni princesses who have come to protect Setsuna. The middleman just happened to forget to tell him what the catch is; one of them gets to eat his heart in one year.

The official site (in Japanese) is found HERE

. It also has sample artwork.

Onihime VS has examples of: