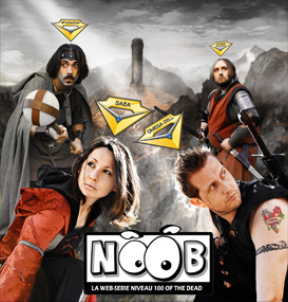 If their leader wasn't watching them, the two people in the front would be fighting and the guy on the upper left would be running after the cute critter he just saw.
"Anyway, I'm glad some stranger sent a request to a Game Master. Because seeing you're scared of the GMs, Gaea was making money off me while I was stuck dancing, and Sparadrap didn't even know the function existed, I could have been left dancing for a long, long time!"
— Omega Zell (to Arthéon, after having his avatar stuck in "dancing mode" by Tenshirock for two days)
Advertisement:

Noob is a French Web Original (that happens to also be aired on television) where most of the action happens inside a MMORPG, Horizon 1.0. The episode releases went from late 2008 to early 2014. It's a series about newbs and noobs that gave birth to the Noob franchise. It was created by Fabien Fournier, who is both director and scriptwriter. In France, it was broadcast on the "Nolife" channel some time before being available on the official site. It's been the top French webseries in terms of audience since 2009.

After being seduced by a TV ad, MMORPG veteran "Gaea" buys the game and creates her character. She's now dumped into an unfamiliar land (a "newb" when it comes to this game) and soon discovers the game is very newb-unfriendly now that most players have reached high levels. Fortunately, there is a guild to help newbs ease into the game; unfortunately, there is a Noob in it. The rest of the guild doesn't fare much better with the presence of a self-centered misogynist, a former high level player who never got over the banishment of his old character because of Real Money Trade and Gaea herself being a greedy Dirty Coward.

The series has three feature-length sequels: Noob: Le Conseil des Trois Factions, Noob: La Quête Légendaire, and Noob: La Croisée des Destins. The follow-up Season 9 began its release while the third of these was still being filmed. After a delay due to the Covid pandemic, Season 10 resumed and is currently (2021) airing on YouTube.

Noob has also been made into a comic and novels written by Fabien Fournier. While the comic is mostly short stories within an alternative continuity, the novels happen between the seasons of the webseries. Each medium is however meant to be independent. A crowdfunded 2D-RPG-style videogame is also in the works, and was released on Early Access on Steam

The Noob webseries provides examples of the following tropes: