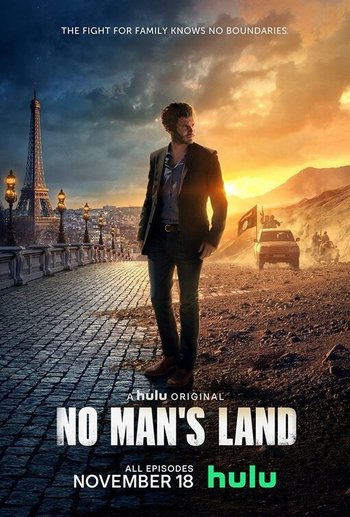 No Man's Land (2020)
No Man's Land is a 2020 French-Belgian-Israelian miniseries produced by German-French broadcaster Arte and Hulu.
Advertisement:

It is set in 2014 in France and Syria. The protagonist Antoine from Paris watches a video of a bomb attack in Syria where he suddenly spots a woman, who reminds him strongly of his sister Anna, who he presumed dead.

In a series of retrospects it becomes apparent that Anna had stopped contact with her family and Antoine still blames himself for it. In order to find her, Antoine travels to Syria and quickly becomes stuck in the frontline between the Islamic State and Kurd YPJ troops. He becomes a prisoner of the YPJ, but later joins them as a fighter and starts a romance with the YPJ fighter Soraya.

In another storyline, a group of three British citizens, Nasser, Paul and Iyad, is shown who voluntarily join IS. One of them, Nasser, is a spy for the mysterious Stanley, who attempts to gather information about the movements of IS.

Not to be confused with No Man's Land, the critically acclaimed and Oscar rewarded movie from 2001.