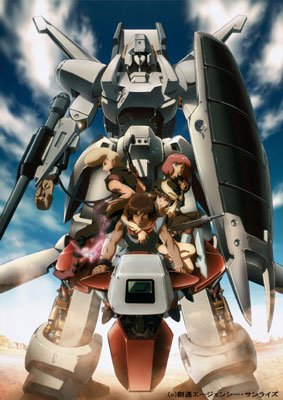 Chicks dig giant robots... and the guys who pilot them.
Show me the way to you! Lead me there where you are!
Advertisement:

Heavy Metal L-Gaim is a 1984 anime television series directed by Yoshiyuki Tomino, with character and mecha designs from Mamoru Nagano, who would later go on to create The Five Star Stories.

L-Gaim takes place in the Pentagona System, a solar system made up of five planets. Oldna Posaydal, the legendary emperor from the planet Gastogal leads his 24 Temple Knights from planet to planet until all have fallen under his control. His final victory is on the planet Mizum in 3975 when he defeats Kamon Walha V, ruler of the Yaman Clan. However, before being overthrown Kamon hid his heir, Kamon Myroad on the planet Mizum with the legendary white mecha, L-Gaim.

Fifteen years later, now grown up and known as Daba Myroad, he lives in planet Koam peacefully. During a trip through the desert, he and his friend Kyou meets a girl named Amu and run into the Lilin's scavenger gang. After a brief scuffle, one of the defeated thugs hands over a cash card to Daiba before dying and requests him to deliver it to a man named Amandara Kamandara (a weapon dealer who sends weapons to both the Imperial army and the rebels). Daba sets to do so, not knowing that this action would lead to him leading a rebellion to free the planets of Pentagona from Posaydal's grasp.

Other than in several Super Robot Wars games, L-Gaim has also showed up on Another Century's Episode saga.