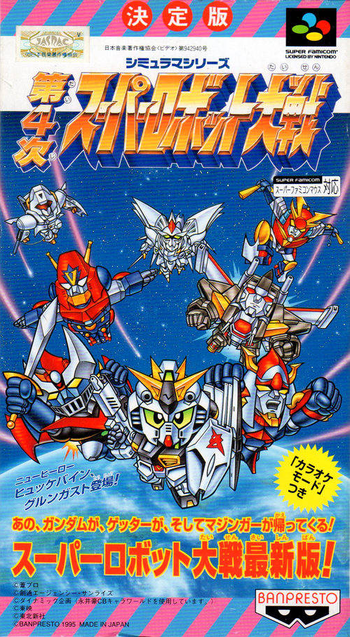 Super Robot Wars 4 is the sequel to Super Robot Wars 3, released on the Super Famicom in 1995. Compared to its predecessor, the visuals are MUCH better, with the game engine refined to the point that every succeeding Super Robot Wars uses the system in 4 as a template, story-writing is improved and additional gameplay mechanics introduced (parts system, manually deciding whether to counterattack or not during enemy turns) would stick around for future releases to ease game difficulty. As it stands, 4 is a very good game on its own right. In fact, the game was also the debut of the Shin Getter Robo, which would reappear in subsequent SRWs.
Advertisement:

Unfortunately, 4 was considered an Obvious Beta by developer Banpresto, who thought they could do way better, thus made an Updated Re-release version for the Sega Saturn called Super Robot Wars F in 1997, a partial, but greatly expanded remake of 4 with an enhanced plot, game engine and an additional Humongous Mecha series added (but at the cost of some previous series being removed). F would be followed up nearly six months later into 1998 with the sequel Super Robot Wars F Final, which showcased the debut of the Mazinkaiser in any medium.

Both games would be ported to the Sony PlayStation. 4 was actually remade earlier in 1996 into Super Robot Wars 4 Scramble, featuring voice acting and CG movies for the time in the franchise. However, Scramble has been Retconned by F and F Final, so no worries there about not playing this obscure Video Game Remake.

The Inspectors have been defeated, but this is still not the end for the Earth and its hostilities with extraterrestrials, as the "Guests" of the Zuvorg Alliance have arrived to finish what the Inspectors have started. Excluding what occurs in the second half of Masou Kishin: The Lord of Elemental, the story of 4 marks the end of the "Classic Timeline".