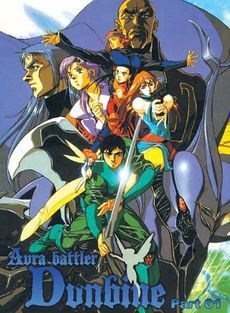 "Fortunate are those who remember the story of Byston Well..."

What do unicorns, pixies, and colossal, insect-like robots all have in common? They're all heavily featured in Aura Battler Dunbine, the brainchild of Yoshiyuki Tomino of Gundam fame.

Dunbine tells the story of Show Zama, a Japanese motocross fan who survives a botched trick by being summoned into the fantasy world of Byston Well. There he meets Drake Luft, a local lord who tells Show that he summoned him to be an "Aura Battler" and pilot the Aura Machines to put a stop to a civil war that is tearing Byston Well apart. Everything starts off well, until Show by chance meets local resistance member Marvel Frozen who reveals that she was also summoned to Byston Well from America and that Drake's true intention is not to save the world but to take it over with the Aura Machines. Horrified at the revelation, Show takes his personal mecha — the Dunbine — and defects to the resistance, making new allies and enemies along the way as he tries to make up for his mistakes and stop his former lord.

Dunbine is mostly known not for its rather standard Tomino mecha plot, but for its interesting concept of setting Humongous Mecha battles in the middle of a Medieval European Fantasy. The mecha themselves take fluid, organic shapes and are much smaller than most mecha designs. The show starts off much more light-hearted and enemy-of-the-week than your typical Tomino anime, but the second half undergoes a massive tone shift and becomes much darker and serious with an explosive climax as "Kill 'Em All Tomino" returns to form.

Has had several spin-offs, including Garzey's Wing and The Wings of Rean.

Compare with Panzer World Galient and The Vision of Escaflowne, two other Humongous Mecha series in a Medieval European Fantasy setting.

"This is this story of Byston Well, as related to me by the Mi-Ferario..."