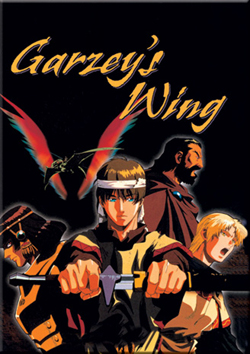 "SHOW ME THE ANCIENT JAPANESE MAN'S SPIRIT!"
"I MUST SOMEHOW MAKE SENSE OF OUR CONVOLUTED SITUATIONS!"
— Chris
Advertisement:

Tales of Byston Well: Garzey's Wing is a three-episode OVA created by Yoshiyuki Tomino of Gundam fame, and produced by JC Staff and BMG Japan. It was released in 1996, and is a Spin-Off of the older Aura Battler Dunbine, despite taking place in the world's past.

The story centers around Christopher Senshu, a half-Japanese, half-American young man out of high school who is seeking entry to college. One day after an argument with his friend, a motorcycle ride leads Chris past the Shiratori shrine, and his eight-bell necklace starts to rattle. Suddenly out of nowhere, he is struck by a giant, glowing goose spirit, and swept away into the world of Byston Well. But he has no time to get his bearings. Instead he is swept immediately into the conflict between the Metomeus Tribe and the Ashigaba Army, who have until now kept them enslaved. As it turns out, Chris has been summoned by the priestess Hassan to be the legendary holy warrior, Garzey's Wing. This role grants him the power of glowing wings that appear from his ankles and allow flight. Because of the shrine he passed, however, he is convinced this must all be the work of the spirit of Yamato Takeru no Mikoto.

But things aren't even that simple. Chris hasn't been transported wholly to Byston Well; only his spirit has, splitting him into a separate existence while his physical body remains in the real world. The two soon discover the ability to communicate via the bell necklace, and as Chris struggles with the conflict he's been thrust into, his real self must search for ways to help him there, and hopefully find a way to reunite mind and body.

Garzey's Wing received a stateside release and English dub by the US Manga Corps division of Central Park Media, which is so entertainingly bad that it must be heard to be believed

and gives the incoherent plot an additional layer of Narm. It was largely unknown among Western anime fans until it was covered in a 2007 Anime News Network column on "Buried Garbage", and has since been shown at conventions and accumulated a cult fandom similar to anime's equivalent of The Room.