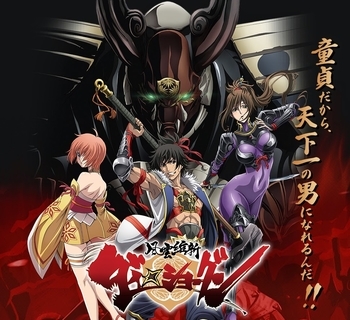 In the late Edo period, Japan had experienced an unprecedented threat by Kurofune (Black Ships), an invasion from foreign countries. But a giant robot called Onigami, which has existed since ancient time, defeated the Kurofune ships and the exclusion of foreigners was achieved. As a result the Meiji Restoration never happened.

Fast forward years later. A young man named Keiichiro is going about his normal life, consisting of beating up fellow delinquents and unifying Nagasaki. Until one day his friend is killed. He is then approached by a beautiful woman named Kiriko Hattori. She explains that the serial killer was after him because they wanted to conquer Japan and they viewed him as a threat because he was actually a member of the Tokugawa family. She also tells him that the only way to defeat them is to use the Onigami. There's one catch: the Onigami's pilot must be a virgin. Can Keiichirou defeat the nefarious group looking to conquer Japan?

Dai-Shogun - Great Revolution (風雲維新ダイ☆ショーグン Fūun Ishin Dai Shōgun?) is a original mecha anime television series, directed by Takashi Watanabe and animated by JC Staff and A.C.G.T. The mecha designs are by Makoto Ishiwata of nitro+ It airs as a part Spring 2014 Anime.

This series is currently being remade into a CGI Animated series.

This anime provides the examples for: