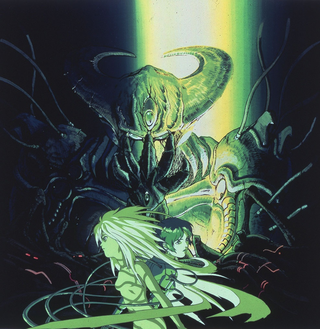 Elaine, who is mute and mentally deficient, and Diana, who is crippled, are part of an illegal experiment in unlocking psionic potential and aimed at creating Super Soldiers. When Elaine escapes from the research lab, Diana is sent to retrieve her, only to kill her in a fit of rage. However, Elaine's mind survives and takes over Diana's cyborg body, transforming into a cyborg mutant creature called the Genocyber.

The OVA was adapted from an unfinished manga by Tony Takezaki, the adaptation being specifically some of the first episode's plot. The plot of the OVA differs significantly from the manga, though reading helps reducing the Mind Screw levels a fair bit.