Manga / Eden: It's an Endless World! 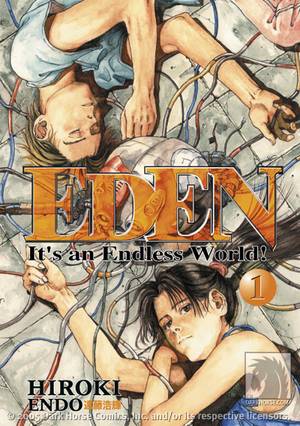 "If I were God..."
"I'm saving the world! You oughta try it yourself some time!"
Advertisement:

Eden: It's an Endless World! is a cyberpunk manga by Hiroki Endo set in the aftermath of a global plague that has radically altered the social and economic stature of the world, and tells the story of Elijah, the son of freedom fighter Enoah Ballard, who opposes Propater, a global pseudo-religious organization that tried, more or less successfully, to launch a coup d'etat on the entire world.

Not entirely successful, they kidnapped Elijah's mother and sister to keep Enoah from opposing them too much. Elijah fled Propater by escaping to South America with his father's combat robot for protection. Over the course of the story, he meets and joins forces with a variety of different, well-developed characters, all with their own motivations, problems, morals and ethics, relationships and agendas.

The story deals heavily with relationships, especially family relationships, religion, drug abuse, death and morality. The complex relationships between characters avoids many forms of easy classification, and many of the characters fail to fall into stereotypical moulds.

Still here? OK, let's dig a bit deeper. Eden is extremely violent, filled with explicit sex and nudity, lots of philosophy, even more religion, and moral ambiguity in ways that would make Alan Moore proud. Characters are regularly killed off, beaten, wounded, tortured, crippled, and raped by villains and heroes alike; and the Messianic Archetype, despite the religious overtones, is a minor character.

Eden ran from 1998 to 2008 in the Afternoon magazine, reaching a total of 18 volumes. The series is translated into English by Dark Horse Manga, who publish volumes biannually due to low sales. Titan Books publish the Dark Horse translations in England, while Egmont Anime & Manga handle the German translation and publication.

Eden: It's an Endless World! provides examples of: