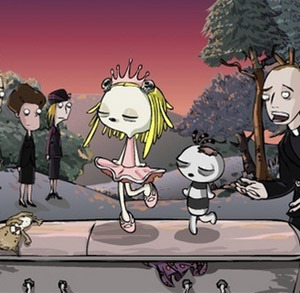 Note that the little blonde girl in the frilly pink dress is actually dancing on a coffin.
"All things truly wicked start from an innocence."
— A Moveable Feast by Ernest Hemingway
Advertisement:

Ah, Innocence is grand. Likely related to the story of the Garden of Eden is an understanding that rather than always meaning goodness, innocence may also entail the absence of a sense of right and wrong, making it closer to amorality. This understanding is sometimes applied to the Psychopathic Manchild. Children Are Innocent sometimes carries the implications of this as well. This may be invoked as the explanation for how someone who Used to Be a Sweet Kid could still go horribly wrong.

On the other hand, the villain may often assume this, and that all good characters are really naive — if they understood things, they would be as evil as he is.

Compare Pure Is Not Good and Virginity Makes You Stupid. The related idea of the "Fall" being a good thing is very common (perhaps even required) in works where God Is Evil and/or Satan Is Good. See also Ignorance Is Bliss, Kids Are Cruel, and Creepy Child. Obliviously Evil is related. If a character comes off as ambiguously innocent not because of the inherent amorality of innocence but because the writers can't remember how grown-up the character is supposed to be, it's Ping Pong Naïveté. If the character is an animal acting out of instinct and therefore incapable of being good or evil, it's a Non-Malicious Monster.