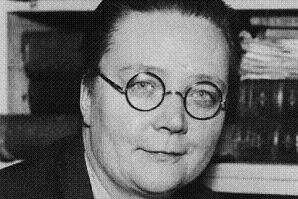 "Those who prefer their English sloppy have only themselves to thank if the advertisement writer uses his mastery of the vocabulary and syntax to mislead their weak minds."
Advertisement:

Dorothy Leigh Sayers (13 June 1893 – 17 December 1957) was an English writer, best known for her detective fiction, particularly the novels and stories featuring Amateur Sleuth Lord Peter Wimsey. Her crime fiction also included many more short stories (of which eleven featured another amateur sleuth, the contrastingly lower-class Montague Egg) and the novel The Documents in the Case, co-written with Robert Eustace. After the death of her greatly admired G. K. Chesterton, she would herself become president of The Detection Club, an association of authors united to maintain the highest standards in the genre.

Before the detective fiction career took off, she worked as a copywriter at a London advertising agency, where she worked on a long-running series of ads for Guinness and created a sensationally successful viral marketing campaign for Colman's Mustard. (Some years later, she set one of her Lord Peter mysteries in an advertising agency.)

She was also a playwright, whose works frequently examined moral and theological questions. They include The Devil to Pay, a retelling of the Faust legend; and the 12-play cycle The Man Born to Be King, a dramatization of the life of Jesus commissioned by BBC Radio. Sayers felt that religious drama was frequently undramatic, populated by flat characters who mouthed archaic dialogue while going through the overfamiliar motions, and strove to avoid this in her play cycle, presenting the characters as real people who speak in contemporary language and are motivated by everyday (and occasionally trivial) concerns. The approach was inevitably controversial, but widely regarded as a success.

In later life, Sayers began work on a translation of Dante's The Divine Comedy. She had completed Inferno and Purgatorio, and was working on Paradiso when she died; the work was completed by her goddaughter and later biographer, Dr. Barbara Reynolds, and published posthumously. (Dr. Reynolds has also edited four volumes of selected letters by Sayers.)

Sayers was also a Sherlock Holmes fan, and a noted player of the Great Game of Holmesian "scholarship". Her contributions include a famous argument for the proposition that Doctor Watson's middle name was "Hamish", and an essay that combined actual historical evidence with the few clues in the Canon to deduce not only where and when Holmes attended university, but where he stayed and which classes he took.

One of the strangest theories to arise from Sayers's work concerns the character Harriet Vane, the love interest of Lord Peter Wimsey. A popular literary theory of the time called biographical criticism

held that all fiction was Self-Insert Fic, and that any character bearing even a passing resemblance to the author must be a full-on God-Mode Sue.note People disputing this view referred to it as "personal fallacy" or "biographical fallacy

". Sayers was one of the strongest voices condemning this theory, most notably in the preface to her 1941 religious commentary The Mind of the Maker

Stung by the vehemence of her rebuttal, literary critics attacked Sayers personally, claiming that Vane, an erudite Oxford-educated mystery writer, was a blatant Author Avatar created to allow Sayers to vicariously "marry" Lord Peter. This bizarre theory unfortunately gained credence due to a number of factors. Sayers was fiercely protective of her privacy, so much so that few knew of her (for the time) romantically adventurous personal life.note  Although her devastating affair with the novelist John Cournos was never actually consummated, she became sexually involved with a motorcyclist and mechanic named Bill White by whom she became pregnant. In order to spare the feelings of her family, as well as to retain her advertising job, she kept her condition secret, giving the boy to a cousin to raise; even her son himself did not realize that she was his biological mother until he was grown. Her subsequent marriage to "Mac" Fleming was troubled, but ultimately enduring. Many critics, those who knew her only by her Christian writings and her superficial physical appearance, assumed she was a pathetic, dried-up old lesbian who had created Harriet so she could have a vicarious love affair without subjecting herself to tiresome sex. (Keep in mind that lesbianism was seen at the time not as active attraction to women but as rejection of sex, since naturally sex was for and about men.) This theory arose during Sayers's lifetime and became one of her Berserk Buttons — in fact, she went as far as to deny that Vane was an Author Avatar note despite the fact that Sayers had adapted her relationship with Cournos into the Harriet Vane/Philip Boyes affair with some specificity — and it gained momentum after her death. It's only since the recent publication of a frank biography and of her own letters that critics have realized just how far off the mark these ideas actually were (and how ironic, if said critics had realised quite how much Sayers had in common with Vane.)

She is a member of the group of female detective novelists known to readers as "The Big Four"; the other three are Ngaio Marsh (who gleefully spread the "dried-up old prune in love with her creation" rumours), Margery Allingham, and Agatha Christie. Most critics consider her the best writer of the four.

Works by Dorothy L. Sayers with their own trope pages include:

Other works by Dorothy L. Sayers provide examples of the following tropes: