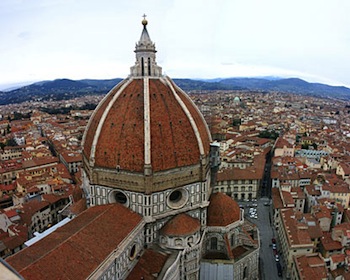 The dome designed by Filippo Brunelleschi on top of the Basilica di Santa Maria del Fiore in Florence, one of the first examples of Renaissance architecture.
"The Renaissance was a load of bloody Italians poncing around claiming to be the golden age of the Greeks come round again."
— Hob Gadling (who knows wherefrom he speaks), The Sandman (1989)
Advertisement:

A reawakening of Europe to the arts and sciences. This era took many distinct forms depending on decade and geographic location. In Hollywood History, The Renaissance is home to Tudor Mansions, Medici Palazzi and Valois Châteaux, William Shakespeare, King Henry VI and his eight wives (or was it King Henry VIII and his six wives?), Queen Elizabeth I, Mary of Scotland, Charles V, the Borgias, Martin Luther, The Protestant Reformation, global exploration in search for gold and spices, and Leonardo da Vinci (who spent nearly all of his time painting The Last Supper or the Mona Lisa and working on that damn "code" of his...). Outside of Western Europe, we have Vlad the Impaler of Wallachia, Ivan the Terrible of Russia, The Polish Lithuanian Commonwealth, Turkish sultans surrounded by gorgeous belly dancers, Mughal rajahs building their pristine white marble mausoleums, Ming emperors in their Forbidden Palace whose halls are adorned with beautiful porcelain vases, Sengoku warlords served by loyal samurai and delicate geishas, and bloodthirsty Mayincatec overlords overlooking their rising empires only to have them crushed by gold-hungry Conquistadores.

Now when people talk about Renaissance they are really talking about two things. The art-historian Giorgio Vasari used the word "rinascita" purely to describe the revival of Italian painting and sculpture since the time of Giotto. The especially grand and overarching way that later historians use to tie together the power and growth of Italian City States as represented in its artistic and literary output, with the Age of Discovery, the dawn of humanism and the flourishing of classical literature is entirely a modern construction. "The Renaissance" as an overall historical phenomenon covering about 200 to 300 years (from say 1350s-1620s), applied to an entire era dates to 1855. It was coined by French Historian Jules Michelet and later adopted by English and German historians. Modern historians, inspired by Postmodernism use the phrase "Early Modern Era" as a umbrella term of which the Italian Renaissance is merely one chapter, accompanied by the Age of Discovery, The Protestant Reformation, the Wars of Religion and so on. Other definitions will date it from the Fall of Constantinople in 1453 (others prefer 1492, the year of Columbus' first voyage to the New World) to the invention of the first steam engine in the 1750s; but it is more common to see it ending earlier and to refer to what came after ca. 1650 as the Baroque era and/or the the Age of the Enlightenment.

The essence of the Renaissance also tends to vary according to geography, since the great artistic flowering associated therewith began in north-central Italy sometime in the 1300s (with Dante Alighieri, Giotto, etc.) and spread gradually and sometimes very, very slowly throughout the rest of Europe after that. As a history buff, it can be quite annoying to see that most "Renaissance fairs" select England rather than Italy as their model, since England was the last Western European state to be Renaissanced. At the time Leonardo and Michelangelo were in their youth, England was still mired in the tail-end of the Wars of the Roses (which cost the House of Medici so much florins that they quit banking and went into the hereditary nobility business). Your average Renaissance Fair in America will as likely as not feature a parade of dirty peasants and noisy farm animals - giving the impression that the Renaissance was a lot more backward than it actually was. Of course, it may also be because some people have a hard time in general telling apart the Renaissance from the Middle Ages aesthetics-wise. (Also, it's a lot harder on a RenFaire budget to recreate a city like Florence than a village). Also, to be fair, once England did get "Renaissanced", they went for it wholesale and were on par with if not ahead of everyone by the 1650s, at least ideas-wise (when their civil war gave rise to some ideas that we moderns would recognise easily as, well, modern).

How it all began

Arguably, the snowball began to roll with the birth of Humanism in the 1300s. Allegedly, the avalanche began with a Florentine poet, Francesco Petrarch, when he accidentally stumbled upon a box with old Roman letters, written by the known Roman orator Cicero. Petrarch was, on some level, aware that the contemporary Latin, used by the Church, needed some kind of revival, because terminologies used in the Medival Era, Vulgar Latin, had corrupted the language. So, Petrarch began to read Cicero`s letters, at first to study the Latin of the Classical Age, and then to study what Cicero actually wrote about. When he learned that Cicero stressed the point of "humanity" (Humanitatis), the idea of humanism took form, in the head of Petrarch, and of his circle of scholars. It was Petrarch who coined the concept of the Dark Ages, which he used to lament the cultural wasteland of his era with the antique glories of Ancient Rome. The revival of Latin led to the revival of historical science, a more thorough study of history, architecture and art, and then to political dreams and experiments involving a united Italy. Thus, a new concept of learning was founded, which led to new science, new political theory, and in turn, a massive upheaval of the medieval society. The pope, puzzled at first, let the humanists struggle on, dumbfounded when he was witness to the excavation of Ancient Rome in his backyard, a little bit frightened when the same humanists began to ask questions around the topics of God and Man, and seriously batshit when the movement in turn led to full religious and social revolution. But then it was too late.

The growing Humanist movement might have changed some ideological perspectives and politics, but had good support from:

However, like the Enlightenment before the American and French Revolutions, the Renaissance, whether in Italy, or its offshoots in Holland, England, France, Germany, Spain and Portugal, was the province of intellectual aristocrats and emerging middle-classes, a small minority at best. The Reformation to some extent succeeded in weakening the hold of the Church and brought power to secular rulers, but it rarely resulted in mass movements, although the movements that resulted in the Peasants' Wars and the English Revolution were steps in that direction.

Revisionist scholars inspired by Postmodernism point out that the Renaissance was not nearly as progressive as it believed or wished it was (no era is, but the Renaissance was the first which truly expected and believed it was). The Age of Discovery led to the start of the Atlantic Slave Trade and colonization of the New World, and this led to the depopulation of native peoples by smallpox and massacres. The Protestant Reformation unleashed witch-hunts and witch-burnings (actually hangings, usually) in their heyday, far more so than in the medieval period, and the Wars of Religion that followed led to horrific acts of violence unprecedented even in the heights of The Crusades. Antisemitism also reached new heights, what with the expulsion of the Jews from Spain and Portugal. Furthermore, while serfdom ended in Western Europe, thanks to greater agricultural demand from Western Europe, serfdom which had never existed in Eastern Europe in any significant level and fashion increased and spread. Likewise, many point out that the cultural and intellectual glories of Italy so often celebrated in Historical Fiction belies the fact that the Italian Wars were ongoing and never-ending parts of this era, and that Italy was more or less colonized by neighboring states who repeatedly sacked and looted its wealth.

The importance of The Renaissance in the "longue durée" is that this was the moment when the Balance of Power shifted away from the Mediterranean (the center of Europe from Ancient Greece to The Low Middle Ages) to the Atlantic (Spain, France, England, Portugal), and thanks to the discovery and colonization of the New World and discovery of new trade routes and the accompanying revolutions in nation-states, military, agriculture and urban planing, Western Europe, and the West in general became richer and more prosperous than Eastern Europe, and the East. This was a true reversal of the status-quo and it has more or less remained the case into the early 21st Century. So in that respects, this was really a Dawn of an Era.

The era as portrayed in fiction: