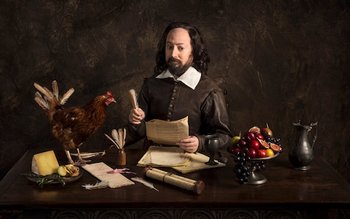 Upstart Crow is a British Sitcom that started broadcasting on 9 May 2016 as part of the BBC's 'Shakespeare 400' celebration. Written by Ben Elton, and incorporating his typical snark at the British Establishment, and starring David Mitchell as William Shakespeare, trying to make his name as a playwright in Elizabethan England.

Much of the humour comes from characters expressing ideas that are relevant to the 21st century - either condemning them, such as the idea Oxford and Cambridge universities provide all the men in positions of powernote because everybody knows women can't do any jobs, like acting or looking after money , or saying It Will Never Catch On. As it is by Ben Elton, expect lots or references to his favourite BritComs.

The show ran for three series and two Christmas specials before transferring to the West End for a stage play which continued the story from where the television series left off, but was one of many casualties of the COVID-19 pandemic and closed after a month. The show latterly returned to TV for a 2020 Christmas special inspired by said pandemic, with Will and Kate in lockdown in the plague-ridden London of 1603.