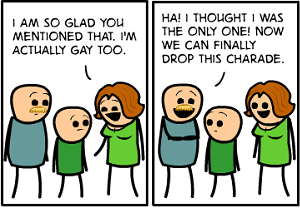 When coming out to your parents goes wrong.
"Have you ever heard about the term "beards"? It is when a gay man and woman date each other in order to hide the fact that they are gay. Like the Roosevelts. So you and I are going to be each other's beards. Then we are going to win Prom King — and Queen and rule the school."
— Santana, Glee
Advertisement:

If you're looking for tropes about actual beards, see Facial Hair Index.

A character who pretends to be another's Significant Other in order to perpetuate a deception.

This card is played when:

Most often seen in the sitcom.

A man dated by a lesbian to make her appear straight is known as "a frock" in British English. A frock makes a woman appear feminine much as a beard makes a man appear masculine.

Gay men who marry The Beard do this generally as an elaborate refusal to come out of the closet. They "prove" it to themselves and others that they are not gay because they have a wife (that they never touch) so they most definitely are not leading a gay lifestyle. Other times, it's an open arrangement with the wife in order to abide by social standards — sometimes the wife herself may be a lesbian.

Occasionally, someone's Beard will have to be someone they're in a Will They or Won't They? situation with. It usually ends up pushing them closer, but gets a Snap Back at the end.

Not to Be Confused with Growing the Beard, where a show significantly improves at some point. Nor is it to be confused The Beard and The Suit setup of a technology startup, the Beard who handles the technology, and the Suit who handles the business side and stops the Beard from walking into traffic or excitedly explaining his proprietary secrets to the first person who expresses an interest.

The Truth About Thomas & Ruby

Everyone thought the story about Thomas Winterbone and his fiancee was romantic until the truth is they're both gay and only marrying each other as a front.

The Truth About Thomas & Ruby

Everyone thought the story about Thomas Winterbone and his fiancee was romantic until the truth is they're both gay and only marrying each other as a front.