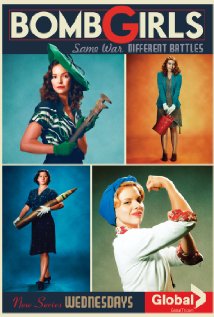 Bomb Girls is a Canadian drama set in a munitions factory (Victory Munitions) during World War II. The six-part miniseries began airing in January 2012 and aired for two seasons. The third season was cancelled in favor of a two-hour miniseries which wrapped everything up, and aired in 2014. It's a primarily character-driven show, exploring a wide variety of themes such as love, grief, feminism, infidelity, honesty, and following your dreams.
Advertisement: