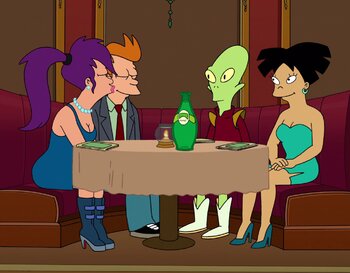 Two couples go out for a date together. This setup has a lot of uses, but the number one use is to compare one relationship to the other. Number two use: bonding between the ladies. If they get along, chances are good the foursome will be friends for a long time. If they don't ... cue the fireworks.

Not to be confused with Two-Timer Date.