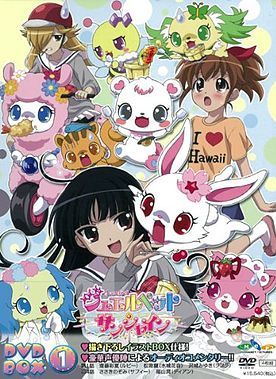 Jewelpet Sunshine is the third entry in the Jewelpet anime.

This time, the story takes place in a universe where the human world and Jewel Land co-exist in harmony. Kanon Mizushiro and the magical rabbit Ruby are 12th graders, roommates and classmates in the Sunshine Academy. They are part of the Plum class, a class infamous in the academy for their bad behavior and poor performance. With the arrival of their new teacher, an ultra-determined pink dolphin, Kanon, Ruby and their colorful classmates struggle to get though high school life and decide what they want to do with their lives.

Sub-plots include the love triangle between Kanon, Ruby and Mikage Shiraishi, the academy's heartthrob, and the occasional Dark Magic invasion which the heroes need to thwart.

This season marks a turning point for the Jewelpet anime; the Magical Girl angle is almost entirely dropped in favor of the genre of zany comedy which the anime has become known for.