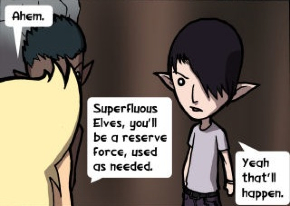 Not every elf can be better.
"Welcome to Hufflepuff! Long live the bumbling badger of mediocrity!"
— That Mitchell and Webb Sound
Advertisement:

Some settings are richly designed and have a wealth of Worldbuilding, with a complex social and political system where multiple factions compete for power. Each of these factions will have a distinct theme: Sister Miriam Godwinson and her followers are religious nuts, Klingons are the Proud Warrior Race, the Zerg have living architecture and biological weapons and are united by a Hive Mind, the Crusaders are the protectors of the realm and keepers of justice, Donatello does machines, and the Sensoth are just sort of... there.

This is Hufflepuff House, an organizational equivalent to the Mauve Shirt or Redshirt Army. They help round out the setting without actually impacting much on it, filling out the empty seats in The Alliance HQ and making things look diverse. At best, they might perhaps be The Cavalry. Hufflepuff House is often part of the Backstory of a new character for an episode, and if the character becomes popular enough their House will become patterned after them. Oftentimes, this happens because the author was never able to implement a way to explore this faction in particular — after all, when most of the conflict comes from the actions of The Federation and The Empire upon each other, some people will choose to remain neutral or not get involved.

Compare to Space-Filling Empire, Sixth Ranger, and What Kind of Lame Power Is Heart, Anyway?.

Named for the group in Harry Potter. Subtrope of Cryptic Background Reference. When a background character/group actually does have impact in the foreground, they are a Hero of Another Story.

open/close all folders
The Trope Maker
Harry Potter features Hufflepuff House, the Trope Namer, who are in one instance basically called "all-the-rest". At their grandest they get faintly praised for "dedication" and "dependability" — loyality distinct from the more heroic-oriented Gryffindor brand. The Sorting Hat's song at one point has the other three house founders selecting students for specific strengths and Helga Hufflepuff saying she'll take the leftovers. Word of God says that they are good at stuff, they're just humble and don't boast like the other Houses. The foremost member of distinction they have is Cedric Diggory, who is a sympathetic character and a Hogwarts champion. They're also mentioned to have the second-most students stay to battle Voldemort. And finally, their mascot is a badger - is fluffy and adorable right up until the point you threaten something it cares about, whereupon it will end you. This is not a coincidence.
Anime and Manga
Advertisement:
Comic Books
Fan Works
Films — Animated
Films — Live-Action
Gamebooks
Literature
Live-Action TV
Multiple Media
Music
Mythology and Religion
Podcasts
Professional Wrestling
Radio
Tabletop Games
Theatre
Video Games
Visual Novels
Webcomics
Web Original
Web Videos
Western Animation
Feedback

A noble house that is basically just there to be there, with extremely little characterization.

A noble house that is basically just there to be there, with extremely little characterization.