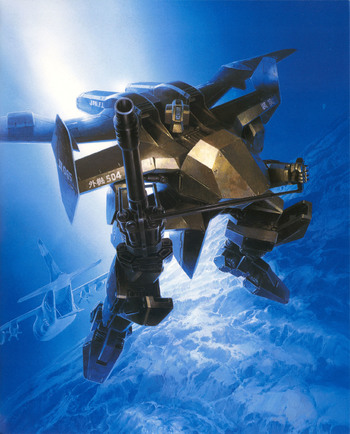 Gungriffon is a series of Mecha Game developed by Game Arts, active from 1996 to 2004. Born out of a prototype for the 3D engine used for Grandia, Gungriffon was one of the first attempt to make a truly immersive Mech simulation on consoles.

In the far-flung future of 2015, the world is fragmented between four superpowers: The Asian Pacific Community (APC), the Pan European Union (PEU), the American Freedom Trade Association (AFTA) and the Organisation of African Unity (OAU). The alliances fight over the world's dwindling supplies of natural resources, bolstered by the creation of the Armored Walking Gun System (AWGS) paradigm. The development of the High-MACS, an heavily armed and hyper-mobile type of AWGS, threatens to upset the balance of power.

The series comprises the following games: