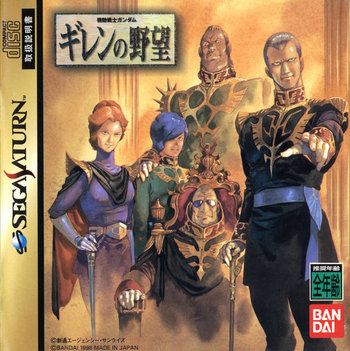 Gihren no Yabou (Gihren's Ambition), commonly known as Gihren's Greed, is a turn-based strategy game set in the Universal Century timeline of the Gundam franchise. It is based political and military management to the One Year War (and in later games, beyond). In a way, it is like Civilization and Hearts of Iron, but simpler to manage, and more difficult. This series is quite popular on 4chan's /m/board, with threads popping up every now and then.

The first game, Gihren's Greed, was released in 1998 for the Sega Saturn, the game follows the path of either The Earth Federation or Principality of Zeon throughout the One Year War. The player has 150 turns to defeat the opposing side with either a scenario victory or a complete victory. If you meet certain requirements, you can unlock factions such as the Titans and Char's Neo Zeon (though they do not have access to post-OYW units for obvious reasons) as well as Kycilia's "Legitimate Zeon".

The second game, Gihren's Greed: Blood of Zeon, was released in 2000 for the Sega Dreamcast and Sony PlayStation. It added a complex political system to the game, the player can now improve relations with various third parties and get rewards(ie: Enemy mobile suits) and create ceasefires and treaties with their enemies. It added more characters from various Gundam OVAs and stretched the timeline to the Gryps Conflict of Zeta Gundam as well as adding Axis as a faction. The map system was also updated, with battles taking place now on separate "battle maps". It was ported to the PSP in 2005.

The third game, Gihren's Greed: War for Zeon Independence, adds an updated map system, political system and military system, several new characters, an updated spying system and Mobile Suits from MSV. The battles are fought in full 3D, unlike previous titles in the series. However, it only includes mobile suits and characters from the One Year War, and does not go beyond that timeframe. It does not include bonus factions, but it allows the player to create his own faction and choose such options as a leader (or creating his own leader), their base of operations, which captains and pilots to start with, which technology group their faction is in and what units the player starts with.

The fourth game, Gihren's Greed: The Menace of Axis, restores many of the features missing in the last game and returns the battles to 2D, instead of 3D. The timeline is stretched to include the events of Gundam ZZ and Char's Counterattack, Factions featured in "Blood of Zeon" also make an reappearance. However it removes the ability to create your own faction as well as the diplomacy system, replacing it with the Alignment System. This game contained EVERY single Gundam protagonist and antagonist, that piloted a mobile suit or was on a warship. Units from Char's Counterattack, MsIgloo, Hathaway's Flash and many more are included—there are said to be roughly 400 MS/MA featured in this version of the video game. A major feature that was taken out were Event scenes having animation: instead there are more than 400 still scenes created in collaboration with Sunrise to represent important events as portrayed in previous titles.

The latest in the series is New Gihren's Greed. Essentially a remake of the original game, it was released on the PSP in 2011, including among others updated attack scenes, a new anime opening and characters from Gundam Unicorn. It differed from earlier series in two significant ways: 1) units are now individuals instead of being produced in teams of three or five, which additionally could be grouped into stacks of 5 units as opposed to three in the past (so now a player could have a group made up of 2 GMs and 3 Balls instead of a group made up of 2 squads of 3 GMs each and 1 squad of 3 Balls), and 2) the player plays as certain characters (besides Gihren and Revil, Amuro, Char, Ramba Ral and Dozle are selectable). Rank affects what units and resources are available to the player (for example, Amuro is a mere sergeant and can only command a small squad, and even at his highest possible rank may only command a single ship or two while someone like Dozle or Tianamen, both much higher ranked, can command entire fleets).

The series is not available for purchase in western countries.