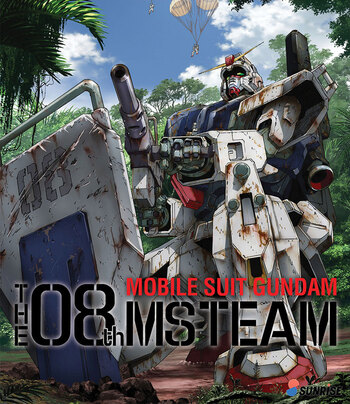 Zeke don't surf.
"Feeling as you do, do you believe you can still fire at the enemy?"
Advertisement:

One of the most popular Gundam OAVs, Mobile Suit Gundam: The 08th MS Team is a 12-Episode Anime released in 1996 and 1999. Set during the One Year War, it runs alongside the events of Mobile Suit Gundam and Gundam 0080: War in the Pocket.

The story centers on Shiro Amada, a young and eager Earth Federation officer, as he takes command of the titular mobile suit team. Notable among Gundam series for abandoning nearly all of the franchise's Super Robot origins, thereby making it the hardest sci-fi, and most solidly Real Robot Gundam show to date. Eschewing the One-Man Army ace pilot protagonist archetypes in Super Prototype Gundams of the main series, 08th MS Team instead focuses on The Squad doing their part in a much more localized conflict, just a small part of the larger war. With nary a Newtype in sight, and the local Gundams being cobbled together out of spare parts instead of ubermachines, 08th MS Team has a much different flavor than the average Gundam.

The series begins with Ensign Newbie Shiro Amada en route to Earth, having just been assigned to command a mobile suit team. Along the way, he becomes involved in a battle and ends up working with an enemy pilot named Aina to survive after they're both stranded in space. Once he makes it to Earth, Shiro soon has his hands full, between having command of the 08th MS Team, dealing with the locals, unearthing his team's emotional issues, and encountering Aina again. Meanwhile, the war heads towards its conclusion, with Aina's brother Ginias working on a project with the potential to win the war in a single stroke...

In 1998, a compilation movie, called Miller's Report, was released, focusing on Shiro's court martial in episode 8 of the series. This movie was never released in North American theaters, but is available on DVD, and scenes from the movie were spliced in with episode 8 in the 2001 Toonami broadcast. In 2013, a short film, Battle in Three Dimensions, was bundled with the Blu-Ray Remaster box set (Hell, Ricardo Fellini really liked it).