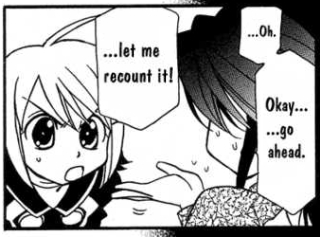 You don't have to ask for permission.
"I think I'll try extra hard to remember today's events and conversations, in case I someday want to recall them verbatim."
— Gordon Frohman, Concerned

A narrative technique in which we're shown events that took place before the episode's main action. Said events may have taken place on-screen earlier, but may also be new scenes depicting things hitherto only referenced.

Specific types of flashbacks include:

Sub-Trope of Separate Scene Storytelling. Dreaming of Times Gone By and Past Experience Nightmare are two ways to show them. See also Flashback Effects for ways of distinguishing a Flashback from normal action, and Viewers Are Goldfish for flashbacks to events that are still fresh in the audience's mind. It's also a brilliant way to indulge in some Exposition of Immortality. The inverse of this trope is the Flashforward, which depicts events in the future instead of the past.

When a character is having a flashback, it can be because of psychic/magical powers, Post Traumatic Stress Disorder or simply resurfacing memories. In either case, it's a common justification for a movie to show the audience a Flashback.

If you want the page about the game Flashback: Quest for Identity, go here.