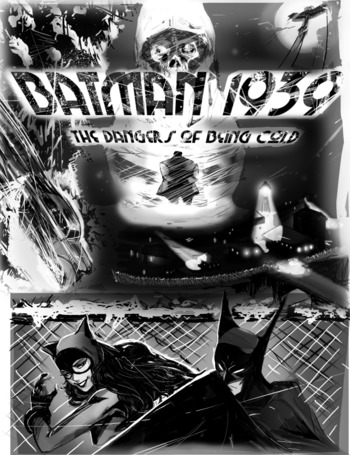 December, 1940
December, 1940. Bodies are disappearing from morgues. A couple lies murdered in the street. To solve the mystery, Batman must seek the help of the most frustrating thief he's ever crossed. But the conspiracy behind it may still be too powerful. Chased on the coldest night of the year, has the Dark Knight found a foe so above the law even he cannot deliver the offender to justice?
Advertisement:

Batman 1939 is a series of Batman fanfiction stories written by Stewart M, set in the early 1940s. Against the backdrop of the Second World War, the Dark Knight works at home in Gotham to clean up his city. In doing so, he finds himself pitted against foes more powerful and influential than any he's ever faced before.

The name of the series comes from the year that Batman was originally released, which in this continuity constitutes the year of his debut fighting crime. Having only been in the game for roughly a year or so, the series focuses on the relatively early days of Batman's career, and his conflicts with more threatening enemies than Gotham's typical street-crime fare.

The first story, The Dangers of Being Cold

, deals with the mystery summarized above; when a team of corpse thieves suddenly escalate to committing murder, the trail is found to lead back to a military base, and Batman is forced to seek outside help to solve the case.

The sequel, Swimming in the Styx

, picks up shortly after the events of the previous adventure and focuses on Batman attempting to dismantle organized crime in Gotham while weathering the interference of the Federal government and Wonder Woman.

, takes place on Christmas Eve of 1941. It follows Bruce's efforts to stop the mysterious Yuletide Thief and attend a Christmas Eve gathering with Julie Madison.

, takes place in 1941 and stars the three characters of Batman, Catwoman and Zatanna.