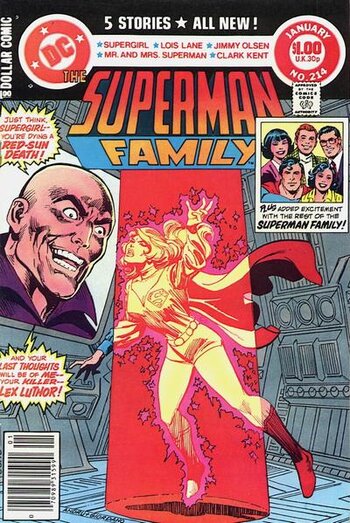 The Strange Revenge of Lena Luthor is a Supergirl storyline published in the Superman Family #211-214 (1981). Written by Martin Pasko and penciled by Win Mortimer, it gave a conclusion to the plotlines revolving around Lex Luthor's sister.

Linda Danvers has gotten a new job for her friend Lena Thorul-Colby, who has been seeking employment after her husband Jeff's death. Linda is about to pick Lena up from the NYC Penn Station when the actions of a super-villain force her to change into Supergirl.

Lena learns her friend Linda is Supergirl during the conflict and is quite happy for the opportunity to become her old friend's confidant during her next battles. However, Linda grows concerned when Lena mentions she suffers from constant headaches. Lena insists on downplaying them as mere migraines until she is found lying on her apartment's floor. Lena is taken to a hospital where she is diagnosed with a brain hemorrhage.

Lena is saved by an emergency surgery, but her mother-in-law becomes frightened that Lena might die without knowing the truth about her origins, so she reveals to Lena everything about her being Lex Luthor's little sister, the lab accident which caused her psychic powers, the car crash which killed their parents when she was a toddler... with the result that Lena gets angry with her family and Supergirl for keeping secrets from her for years.

Supergirl does not know how to make it up to her friend, but her dismay becomes a minor concern when Lena's sanity is threatened by someone who holds a grudge against her family.