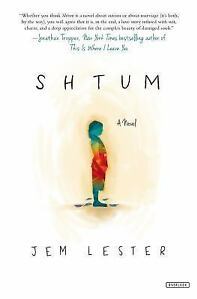 Shtum is a 2017 novel by Jem Lester.
Advertisement:

Ben Jewell and his wife Emma have just learned that their ten-year-old autistic son Jonah, aka JJ, has been rejected for a residential placement because the local authority has decided that he would be better served at home. To help their case, Ben and Emma decide to temporarily split up, because single dads in their situation have a higher success rate with tribunals. Emma will stay at the family home, and Ben and Jonah will move in with Ben's cantankerous father Georg, who has always been distant towards Ben, but dotes on Jonah.