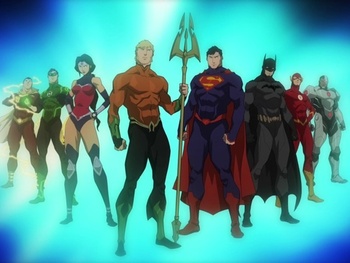 The DC Animated Movie Universe is a Shared Universe that exists as part of the DC Universe Animated Original Movies line starting in 2014. All movies in the line, which itself started in 2007, originally existed in their own continuity. But due to a desire to create a shared setting that mirrors the comics, movies set in this universe have become increasingly common.

This continuity has yet to receive an official name, so we're giving it one for convenience. The first few films were often called the "Animated New 52 Universe" or something similar because of the heavy influence from said comics. But as further films were made, they were allowed greater freedom to adapt other DC eras like Post-Crisis and DC Rebirth, as well as add original ideas. This has allowed the films to avoid being an Unintentional Period Piece for the now-superseded New 52, and to create a unique mythos of their own.

In many ways, it's the Darker and Edgier Spiritual Successor to the DC Animated Universe, being that it's also a shared universe with a colorful art style, epic plots, top of the line voice talent, and a mix of both comic accuracy with original storytelling. That said, because it's direct-to-video, it doesn't have to cater to basic cable or network television standards. This means, like many other titles in the wider Animated Original Movies line, the films feature intense and graphic violence, frequent uses of swearing, an increased focus on sensuality, and the exploration of themes darker than what could ever be done on children's television or even some of DC's general audience works.

This universe's story officially finished in 2020's Justice League Dark: Apokolips War, a Post Apocalyptic Crisis Crossover. However, the trailer for the 2022 DC Showcase short film DC Showcase – Constantine: The House of Mystery confirms that it is set after the events of that film for Constantine. It was succeeded by the Tomorrowverse, another sub-series to the DCUAOM which began with the 2020 film Superman: Man of Tomorrow.

Works set in the DC Animated Movie Universe include: