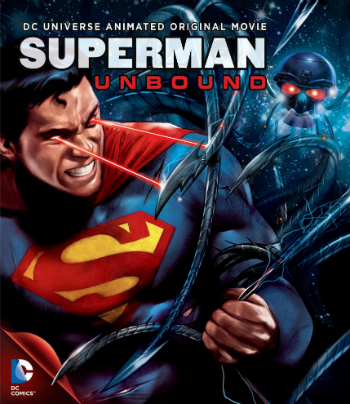 "Millions under siege. One Superman to save them."
Advertisement:

Superman: Unbound is an animated adaptation of the 2008 comic arc Superman: Brainiac which was released in 2013. Voice actors include Matt Bomer (White Collar) as Superman, Castle stars Stana Katic and Molly Quinn in the respective roles of Lois Lane and Supergirl, and John Noble (Fringe) as Brainiac. The film is part of the DC Universe Animated Original Movies line.

Lois Lane is not impressed with Brainiac's gloating.

Lois Lane is not impressed with Brainiac's gloating.