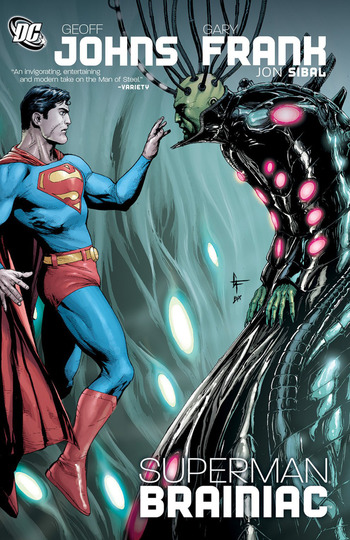 Story by Geoff Johns. Art by Gary Frank
"I will be everything there has ever been, Kryptonian. I will be evolved into perfection."
— Brainiac
Advertisement:

"Superman: Brainiac" is a story arc written by Geoff Johns and illustrated by Gary Frank, published in Action Comics #866-870. The story is notable for several major plot developments regarding Superman: the death of Superman's adopted father Jonathan Kent, the return of the pre-Crisis bottled city of Kandor, and the return of the original Silver Age incarnation of the super-villain Brainiac. It also serves as a prelude to the "New Krypton" Story Arc.

Superman finds and defeats a Brainiac's drone, which has just fallen to Earth, and takes it back to the Fortress of Solitude. As he is examining it, Supergirl reveals a startling fact: that is not Brainiac. Superman has never fought the real Brainiac, as all earlier encounters he had with Brainiac were with one of his probes. Then she reveals she is terrified of Brainiac because he stole Kandor, the capital city of Krypton.

After talking to his cousin Superman realizes Brainiac is trying to locate him, and he decides to track him down, fight him and retrieve Kandor before Brainiac finds Earth and him.

This storyline was adapted to an animated feature: Superman Unbound.