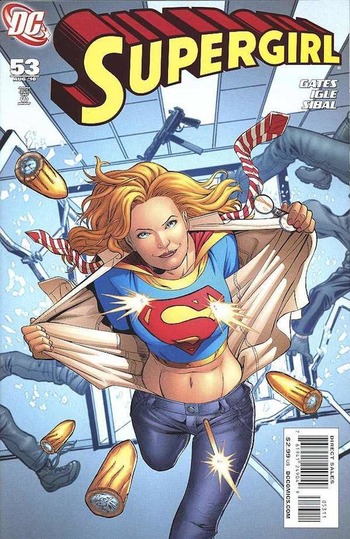 "I... I thought I was helping. I mean, what's the use of having all this strength and everything if I can't use it to fix things?
Supergirl: No, listen to me. I have to say: I know you love me, and that's why you feel a need to act like my big brother or my dad... But you're neither one! I'm capable of recognizing my own mistakes, Kal! I don't need my nose rubbed in them! Maybe I'm not perfect like you—
Superman: Hey, I'm not—
Supergirl: Maybe I need to learn things the hard way. But I am learning! I want to be a family with you and Uncle Jon and Aunt Martha, but I don't need your... validation! I can get by on my own terms, and I'm doing just fine, and—
Superman: I know.
Advertisement:

Supergirl 2005 or Supergirl Vol 5 is the fifth Supergirl self-named comic book series, which began publication in October of 2005, spanning 67 issues and 2 annuals. This series features the modern Kryptonian Supergirl, Kara Zor-El, who first appeared in Superman/Batman storyline The Supergirl from Krypton (2004).

After arriving on Earth and being saved from Darkseid by Superman, Batman, and Wonder Woman, Kara Zor-El tries to adapt to her new home. Unfortunately, she unknowingly suffers from Kryptonite poisoning, which alters her behavior dramatically and turns her into a very erratic, unstable, and unpleasant person for one whole year, in addition to plaguing her with horrible nightmares and bad memories.

After recovering from her sickness, Kara sets to work clearing her name, reconnecting with her cousin and her new family, rebuilding previously burned bridges with other heroes, and learning how to be a hero herself. However, the coming of Brainiac, the rescue of Kandor, the return of her parents, and the rise and downfall of New Krypton will make her life harder.

Sterling Gates and Jamal Igle's creative team took over story and art duties respectively in issue #34. Their run — Supergirl #34-59 — is regarded as one of the best runs of the character. It clocked in at #69 on The Hollywood Reporter's 100 Best Super-Heroes Comic-Books List

. Mark Waid’s Supergirl and the Legion of Super-Heroes #16-36 run is also considered excellent.