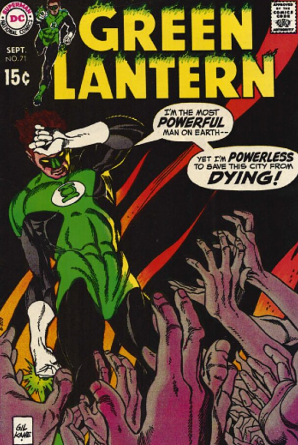 You can't always save the day by hitting things.
"You have nothing! Nothing to threaten me with! Nothing to do with all of your strength!"
— The Joker, The Dark Knight
Advertisement:

A hero or villain can have superpowers, fighting skills, knowledge, wealth, power, technology, political and social connections, all of which help them to achieve their goals. But sometimes a situation arises where their power is rendered useless. No, they haven't wandered into the range of a Power Nullifier or been Brought Down to Normal. They don't have Useless Superpowers that regularly fail to work properly. They'll still punch as hard as they normally can, or use their genius intellect to try to think their way out of the problem, or they'll call on all their connections and resources and favors owed, but none of those things matter here.

Unlike an Outside-Context Problem which a character cannot anticipate but might still overcome through More Dakka or Explosive Overclocking their powers, this is a moment which could just as easily be caused by a regular antagonist or circumstance and When All You Have is a Hammer… just won't solve the problem or the Inverse Law of Utility and Lethality has come back to bite a character hard. This is the moment when a character can see that using their power will gain them nothing and get them nowhere.

For a hero, it may be because the villain has captured a loved one and is using them as leverage, or is forcing the hero to make a Sadistic Choice where they can only save one person while condemning another. Or maybe in a universe with magic and super powers, there's no way to bring someone back from the dead.

For a villain, perhaps they need to crush the hero's spirit and send them past the Despair Event Horizon to achieve victory, but Torture Is Ineffective and the hero simply won't break, no matter what. It also might be the case of a character with powers who just can't improve his own life with them.

These situations often arise to teach a character and the audience a valuable lesson: One can't solve every problem just by being what they're an expert at; there is great value in expanding one's knowledge; a friend can help with a problem, or that one can gain somehow by losing. This lesson is an antithesis to Time to Unlock More True Potential, in that improvement can also go sideways instead of forever upwards.

Sometimes there's a situation where a fighter has To Win Without Fighting. Or it could be that a Flying Brick can only succeed by learning to be a Guile Hero. Or the Science Hero has to stop overthinking and see that there's a Mundane Solution. It could also be a Necessary Fail in order to ensure a positive outcome some other way in the future.

Often though, it winds up being a case of Failure Is the Only Option and a lesson that we all need to Know When to Fold 'Em; Misery Builds Character, and tragedy makes for good drama.

This trope can be related with Unwitting Pawn, in which case the hero's physical abilities or resources are useless against the guile of The Chessmaster, the Manipulative Bastard or the Magnificent Bastard. On the flip side, the latter three can themselves fall into this trope against someone that's Too Dumb to Fool.

If a powerful character loses to a still more powerful character to demonstrate the second character's greater power then it's the The Worf Effect. If a character's power takes the form of wealth but they can't pay for a solution like buying their way off a sinking ship, then it's a case of Money Is Not Power. If a character literally loses their powers and/or abilities and has to find a way to succeed without them, then they're Brought Down to Normal or Your Magic's No Good Here. Compare with Reed Richards Is Useless where the hero has powers/resources/tech that could solve numerous real world problems but only ever seems to use his gifts to fight the next villain. Also compare with Kungfu Proof Mook where it's a specific opponent who's immune to the hero's regular abilities. Contrast its polar opposite, This Looks Like a Job for Aquaman: the character's power is usually lame and has little use, but upon meeting a certain specific situation its use becomes highlighted. Contrast also Swiss-Army Superpower where they can use their powers for a lot of things, even improbable ones.

Whatever the situation, this is where it really pays off to be Crazy-Prepared.

Cole fails to save Trish.

With all his power, Cole could not save Trish.

Cole fails to save Trish.

With all his power, Cole could not save Trish.