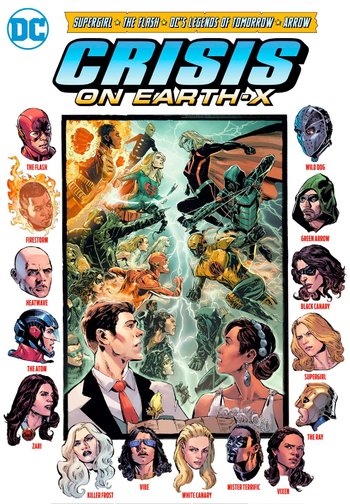 Harry: There's a fifty-third Earth, and it's called "Earth-X". It doesn't have a designation because it's a place so awful, so horrific, no sane person ever travelled there. Basically our Earth: same history, same timeline, with one crucial and critical difference.
Martin: Let me hypothesize. The Nazis develop the atomic bomb before the United States did, and they're more than happy to use it.
Harry: Yes, the Nazis won the war. And New York, London, Paris and Moscow, all obliterated. The S.S. set up outposts. Not only all throughout Europe, but throughout the Americas, and Hitler continued his brutal reign, aided by Prime Ministers and Presidents sympathetic to him, until his death in 1994.
Advertisement:

Crisis On Earth-X is the fourth annual crisis crossover television serial, of The CW's Arrowverse, following Flash vs. Arrow, Heroes Join Forces and Invasion, and is told across Supergirl, Arrow, The Flash, and Legends of Tomorrow with characters from Freedom Fighters: The Ray also appearing.

After a decades-long courtship and many near death experiences between them, Barry Allen (Grant Gustin) —better known as The Flash—and Iris West (Candice Patton) are finally getting married. Naturally, the momentous occasion is attended by all of their closest friends (and enemies) — super or otherwise.

Before their vows can be shared, the wedding is interrupted by evil counterparts of our heroes from Earth-X — an Alternate Universe wherein Nazi Germany won World War II. Naturally, this rallies all of the Arrowverse's superheroes together once again for a common cause.

Not to be confused with the extremely similarly named Marvel series, Earth X.

Characters featured in this crossover include:

Crisis on Earth-X consists of four episodes aired in pairs on November 27th and 28th, 2017.

Crisis on Earth-X contains examples of the following tropes: