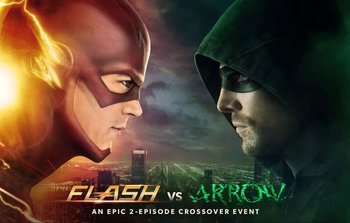 The Bolt or the Bow
Caitlin: Barry has super powers. Oliver has a bow and arrow.
Diggle: Do you have any idea how many people Oliver has killed with that bow and arrow?
Cisco: Recurve bow arrows can travel up to 300 feet per second, so, like, 200 miles an hour. Barry can run three times that fast.
Diggle: Whatever. Oliver's been doing this a lot longer. My money's on experience.
Cisco: My money's on speed.
Felicity: Please tell me you're not actually having this conversation right now.
Advertisement:

Flash vs. Arrow is the very first annual crisis crossover television serial, of The CW's Arrowverse told across The Flash and Arrow.

Compared to what was to come, this crossover was much more low-key affair. Team Flash is battling a new metahuman Prism that can induce a Hate Plague when Oliver, Felicity, and John show up looking for a lead on boomerang crazy criminal that's been lurking in Starling City. Barry is ecstatic at the chance to team up with Oliver, but Oliver decides to use it as opportunity to train the newbie hero Drill Sergeant Nasty style, which Barry chafes at. Barry gets hit with the Hate Plague forcing Oliver to fight his friend to save him. Then Team Flash decides to visit Starling City where they take down Captain Boomerang who has a grudge against Lyla and A.R.G.U.S..

Flash vs. Arrow was broadcast in two episodes on December 3 and December 4, 2014.

Flash vs. Arrow contains examples of the following tropes: